Head Shaving: When my brother was diagnosed with leukemia, I put together a head-shaving fundraiser.  I asked several of his friends to volunteer, and the response was so great that we cut off the number of to-be-head-shavers at 13.  We 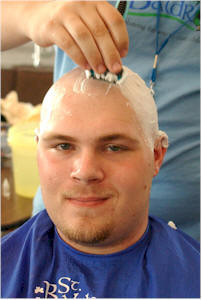 took pictures of each volunteer and made posters which we placed in local businesses and asked people to vote on who they thought would be the “Best Baldie”.  We then held the head-shaving at the local high school after their last home basketball game.  The Best Baldie was first crowned with a sash and fake flowers.  Then we auctioned off each volunteer.  Whoever bid the most got to shave the volunteer.  Most volunteers had money lined up ahead of time and had it rigged to where people were bidding against each other to raise the bids.  Several had collected money at work, for instance, and then had 2 assigned bidders the night of the auction.  Our local professional auctioneer donated his time, and several local hairdressers donated the use of their shavers as well as their time.  The last person to be auctioned was our dad, and since many people had come to bid that didn’t have someone to shave, we suggested pooling the rest of the bidders’ money and letting the grandkids shave my dad’s head.  All winners shaved the volunteers simultaneously, each in their own creative way, which was quite a show!  The professionals finished them off with razor blades.  We raised $16,000!!  The whole event was done secretly (my brother was initially in the hospital for 6 weeks).  We videotaped the whole thing and the next day the Baldies went to the hospital to surprise him and showed him the video.  This event works well in a small community.

I’ve been raising money for the American Cancer Society ever since as a tribute to my brother.  I teach high school and do the activities as fundraisers for our Relay For Life team.  We did a variation of the head-shaving with teachers names on donation containers.  The teacher with the most monetary votes had to shave his head at a school assembly.  Another year we had several teachers who volunteered to dye their hair. Each teacher had a collection container and every teacher that reached a designated goal had to dye their hair.  Another year several senior boys did the head-shaving fundraiser with each raising the designated amount shaving.  One boy shaved his legs instead of his head.  A senior girl cut her extremely long hair to donate to make a wig.  (Source: Cherie B, Carmi, IL)

Operation Beard Off: Our school principal had never been seen without his beard. We managed to convince him to shave it off at our school country fair if we had enough donations to encourage him to do this. We set a minimum amount that we wanted to raise and advertised this as a “secret minimum” — this meant that the donations kept coming in … because no one knew if we had reached the minimum or not! Our fair usually raises about $13,000. We actually raised $1,600 from this single promotion (our minimum had been set at $1000) and we were thrilled with the response from such a small school community! Source: Andrea

Moustache Growing Fundraising: A group of over 40 University of Georgia veterinary students all grew mustaches to raise money for the Wildlife Treatment Crew, a student volunteer organization that assists wounded animals. Each participant was sponsored individually.

Goatee Growing Fundraising: Officers from the Milford, Massachusetts Police Department conducted a “Goatee for Givers” campaign to benefit the needs of a severely challenged child who had endured numerous medical setbacks. Each officer was charged with raising at least $100. They agreed to be publicly shaved on the front steps of the police station if they came up short.

Haircut Fundraising: A barber shop in York, Pennsylvania held a six-hour Cut-A-Thon to help pay the medical bills of a seriously ill child.