To raise actual items for a local women’s shelter several church groups were willing to canvas nearby neighborhoods on a “Treasure Hunt”. They took in food, toiletries, clothing and monetary donations. One church had a contest between their groups to see who could obtain the most “stuff”. Any items not needed for the shelter were passed on to other shelters or sold in a fundraising garage sale for the shelter. People were more willing to give items than money to these 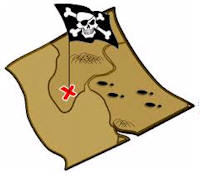 strangers at their doors, but all was needed for the shelter.  Submitted by Bryan P, Graceful Living, Middlebury, Indiana