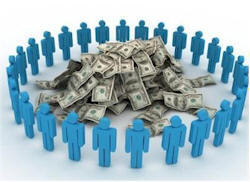 Here’s an excellent example:  Social media is blamed for a lot of wrongs in today’s culture, but for Paul D’Amico, Facebook helped turn his evening walks into a crowdfunding fundraiser for pediatric cancer patients at Children’s Hospital of Philadelphia (CHOP) that has raised more than $40K. D’Amico, a math teacher at Philadelphia Academy Charter School, said he started walking in December for health reasons. When he began posting photos of himself at different locations around Springfield, he started receiving a lot of support from friends and family on Facebook.

He was a couple weeks in when he ran into an ex-student who was undergoing treatment for cancer and on the walk that night wondered if he might be able to channel the outpouring of support toward a good cause. “I thought I had to do something. So I made a text, on Facebook, that asked the community, ‘I have this idea, if you’re interested, let me know and I’ll walk to your house and I’ll collect money and we’ll start a little fundraiser for CHOP,’” D’Amico said. A simple premise: A person in Springfield would message D’Amico and pledge money for CHOP and he would walk to their house and collect it.

Four months later, D’Amico said $41K has been donated. He has T-shirts, a dedicated Facebook page, “Paulie’s CHOP Around the Block,” a CHOP site where people can donate directly, and the continued support of local businesses, such as MaGerk’s Pub, which has hosted events to contribute to the cause. “I credit it all to social media, because of how stuff can go viral and spread around and things like that, and I started taking selfies and I think that was a big thing, too, because friends would see their friends getting a picture with me and they would say, ‘Oh, I want in on this,’ and it just took off.”

For D’Amico, the time and effort he said he put into the project has not been in trying to grow his fundraiser, but trying to manage that growth. There is the walking itself, then stopping with the people at each house to snap the picture and usually talk for a bit. The money had to be counted, documented and deposited, and then he would update Facebook with the photos and a screenshot of the calculator showing the new total.  (Source: Springfield Sun, April 09, 2016)

One can simply start an online crowdfunding fundraiser and share your page via social networks such as Facebook and Twitter. That will help the message spread fast! To further boost donations, offer thoughtful rewards. For example, you could offer a personal shoutout on your social networks to those that donate $20 or more. Similarly, you could offer those that donate $50 or more a social shoutout and a big hug!  Online crowfunding fundraising is easy and it must be a part of ones fundraising efforts.  Source: Pat S. , United Kingdom