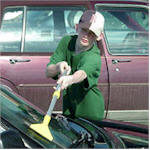 and thanks them for their donation. We had all the squeegees donated as well as the windshield washer fluid. We generally mix it 50/50. We generally do two locations from 8am-noon and generally make between $800 and $1000 dollars. A lot more than if we would have washed the entire car. We are in our 3rd year doing this. There’s very little setup (your pail and pamphlets) and it takes a very small amount of people to pull it off. We generally have 5 people at each. One person to ask for the donations and two teams of two so we don’t slow the drive thru lane down if we get multiple cars in a row. Contributed By:  Jamie R,. Cystic Fibrosis Volunteer