A friend and I came up with this one a few years ago for Child Abuse Prevention Month (which happens to be April). Find a popular teacher willing to participate. You’ll also need lots of duct tape. Post flyers around the school a week ahead of time advertising your fundraiser. On the appointed day, during lunch hours, find a spot where students and faculty pass by regularly. Set a chair up against a wall so that the side of the chair (NOT the back or front, otherwise it won’t work

If you want to, before removing the chair, take bets on how long the teacher will remain on the wall. It makes the game even more interesting for everyone. When my friend and I did it, we raised nearly $100. We also spoke to our respective health classes about child abuse and the effects of it. Students and teachers alike donated more during class. Out of both classes, we made nearly $50 total. We also earned a spot on the school news show. We donated the money to the Lewis House, which is a home for women and children who have been abused. In addition to the school news show, we also earned a column in the Community Action Council (they run the Lewis House) newsletter. Sticky Fly is a great way to involve the students and faculty in a fun and engaging activity, and to raise awareness at the same time.  Submitted By: Heather G.

More: A Bloomington High School principal had a great view of a basketball game halftime festivities after agreeing to participate in a fundraiser for the BHS Poms squad, and found himself affixed to the gymnasium wall. Raising money for a trip to a national competition, the BHS Poms sold tape at one dollar per foot. Enough sticky stuff was purchased and swiftly applied to securely hold the principal to the wall. Local businesses also donated money to the effort.

And More: The Watts Elementary School principal in Naperville, Il, agreed to be duct taped to a wall as a reward for a spring fundraiser sponsored by the Parent Teacher Association. Students who sold more than seven items earned the chance to duct-tape the principal to the wall. The added incentive worked. The school sold nearly 900 items and generated $5,000 profit for the PTA. The PTA fundraising chairperson said the sale brought in twice the revenue they anticipated. One fourth-grader said the opportunity to duct-tape the principal was part of the reason she wanted to sell items to her family and neighbors. Over 50 students took their turn with the tape.

And Even More:  Wrentham, MA: When a King Philip High School student discovered a school fundraiser where a teacher was taped to a wall, she knew she had to bring the idea to KP. The fundraiser, called ‘”Stuck for a Buck,” had students tape the King Philip Principal to the wall of the KP cafeteria during the four lunch periods. Standing on a chair while being taped to the wall, the goal was to get the principal stuck to the wall so she would stay up when the chair was removed at the end of lunch. The proceeds from the fundraiser would be used to send over 150 care packages to service men and women overseas. Pieces of tape were available for $1 each with the option to buy more. The KP chapter of DECA did the project along with KP Cares, which was formed last year. The KP principal wasn’t sure what to make of the idea initially, but as students took turns taping her to the wall, it was almost as if she was enjoying the event more than the students. “She was a little skeptical of it. I’m very glad she agreed to it because it’s obviously turned out very well.” While being taped, the principal took part in some good nature heckling, threatening to give out dentitions for those didn’t donate and even telling football players they would be ineligible for their Thanksgiving game if they didn’t help out. While no one was going to get a detention and the Thanksgiving game was never in danger of being canceled, students eagerly took the opportunity to tape their principal to the wall. As the final lunch period came to an end, the chair was removed and the principa was left against the wall, held up only by the tape. By the end of the day $200.10 was raised. In addition, Wrentham Cable Access filmed the event and plans to show a time-lapse video of the process. 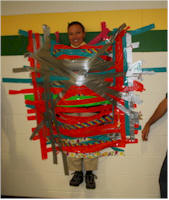