In Louisville, Kentucky, nearly 40 paintings were displayed at the Louisville Public Library, but not on traditional canvases. This artwork was created on 55-gallon metal drums by students and teachers in the Boulder Valley School District. 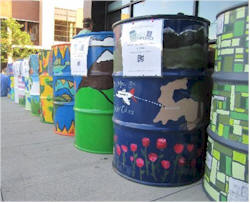 The barrels were part of the Louisville nonprofit Impact On Education’s program called Barrels for Education. The barrels were distributed to 22 Boulder Valley schools, and students and teachers chose a theme and painted them. Some schools took on more than one barrel.

Members of the public could use their pocketbooks to vote for their favorite one. Each participating school received a portion of the proceeds, and the three that draw the most money received bonus funding. Each barrel had a QR code that could be read with a smartphone, taking people to the nonprofit’s site to allow them to donate any amount to the barrel of their choice. Donations were accepted online or in person at the Louisville library.

One barrel, called “Postcards” was painted green with “postcards” depicting well-known Louisville images — the Historical Museum, the John Breaux statue, an LMS pirate’s flag, local restaurants and the familiar miner’s statue in front of City Hall. Sitting next to that drum was another called “The Pond,” inspired by Claude Monet. Other themes included a play off the game Barrel of Monkeys, and Vincent van Gogh’s “Starry Night.”