You have people donate cakes.  Usually these people would be the people who are involved in whatever the money is being raised for. You put numbers around tables (usually 1-100, depending the area your in).  We usually tape the top of the 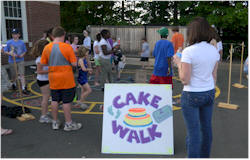 number close to edge of the table and far apart enough for people to stand by their numbers.  We have approximately 30-40 people show up most of the time for a cake walk.

You charge them .50 per number (usually we charge .25 because of the size of the crowd).  They can buy as many numbers at once as they want.  They stand by their numbers.  You have a second copy of the numbers that are on the tables in a bag.  Once the numbers on the tables have all been sold, ( if all the numbers are not sold you just flip each one over until the next draw, and if one of those unsold numbers should be drawn, just draw another number) then you draw the number and the person who bought that number is the person who wins a cake.

You also have numbers put on each cake and a separate bag with these numbers in as well.  Then you also draw a cake number.  That is the cake they win.  The number of cakes you have is the number of rounds you have.  People line up to buy their numbers again after each cake is won. ( They can choose different numbers on the tables each time )  Have some fundraising fun!   Source: Carolyn J, Westport Recreation Committee President, Junior Dart Organizer