Does anyone in your group know someone famous? If not, don’t be discouraged: Neither did the Key Club of Lewistown Area High School in Pennsylvania, and they made a successful celebrity cookbook. The idea was well thought-out from 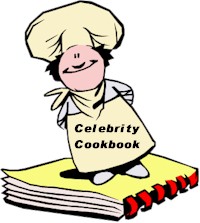 the beginning. “The initial step in our plan was to determine a fundraiser that would be well received and profitable during the present economic times,” said the club advisor. “The club determined that, due to more families cooking at home to save money rather than eating out, a cookbook would be a good project to pursue.  “With so many cookbooks on the market, we knew we needed to design one that was unique. Through brainstorming, the club determined that recipes from celebrities—politicians, entertainers and athletes—would be out of the ordinary and of interest to potential buyers.”   Source: Key Club

• Send letters to 500 celebrities.
• Allow a couple of months to receive the recipes. (Ninety came through for the Lewistown Area club.)
• Type, scan and organize the recipes and photos into the desired format.
• Get sponsorships to cover costs.
• Hold a cookbook cover contest.
• Auction celebrity photographs received at a Kiwanis pancake event.
• Order and sell books. (This club ordered 270, which included a 20-book donation from the printer.)
• The club then presented a donation of $5,000 to Caitlin’s Smiles, an organization that gives arts and crafts “smile bags” to chronically ill children in 47 hospitals