The image of the library in Bridgewater, MA as a quiet, calm environment was put on hold as golfers putted along between the stacks of books, aiming for a hole-in-one. The Bridgewater Public Library was converted into a miniature golf course for the day to raise funds and attract attention for the institution. Dozens of families stopped by in the morning and afternoon for a round or two of golf among the books.  “It is a lot of fun and is something different to do, to get patrons into the library and check it all out and to raise some money at the same time,” said the event organizer as part of her role as fundraising coordinator for the nonprofit Friends of the Bridgewater Public Library. “This is a great way to get them through the whole library to see what’s available.” 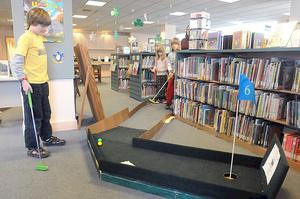 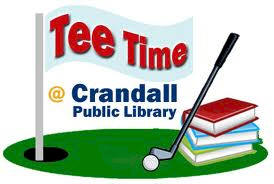 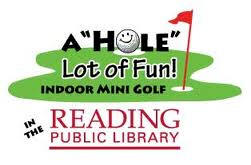 For $5 a person, mini-golfers were able to play an 18-hole course specially designed for libraries, provided by a commercial vendor. She said she had heard about the company last March when she brought her kids to a similar mini golf event at the library in Bourne.

“It brings people into the library who haven’t been coming,” “In the winter time, there is not a heck of a lot to do. And so many families — unfortunately, kids — spend so much time in front of the television and with video games. This is like a nice family activity they can do in the winter. I love to see whole generations, grandfathers, sons and daughters. I like hearing them say, ‘Grandpa, watch this shot.’”   In addition to the admission fee, the Bridgewater Public Library raised funds by having 15 of the holes sponsored by a different local business.

This is not limited to libraries. Virtually any organization can hold one.  One school laid out 18 holes in the hallways of the school and had a weekend long competition at $10 a head. All you need is some Astroturf carpet, some putting cups, putters, and golf balls and you’re good to go. Of course, you could create some great hazard holes as well, just to make it more challenging. How about instead of the windmill on the 18th hole, you have the principal swatting away shots with a broom?  It’s a do it yourself fundraiser because you can put it all together on your own and use existing facilities. And another nice thing about it is that you can do it year after year while adding in lots of additional fundraising activities besides the mini-golf tournament.  It’s perfect for northern states where winter lingers a little too long and spring fever hits.

The Jackson High’s (Jackson, MI) indoor miniature golf course, was put on by the school’s National Honor Society to raise money for the Haiti relief effort. Students formed teams and designed 10 holes. The course went up and down the four floors and twisted through hallways, taking visitors 30 to 45 minutes to complete. In one Christmas-themed hole, players hit their balls down a natural slope in the basement, through a pipe under a glowing, rotating reindeer, and into the hole inside a small present under a tree. There was a Moby Dick-themed hole with a papier-mâché whale, a crime scene with two young men in lab coats and a New York City scene with Spider-Man scaling one of the skyscrapers and students playing guitar, as if they were on the streets of the Big Apple. The final hole began on the third floor and sent the ball through piping propped up in the air in the stairwell to the second floor, where players hit it through another set of pipes to the final green on the first floor. Players had to take the elevator to go down to each floor.

The school conducted a similar fundraiser about three years ago. After planning out this year’s event, the earthquake struck Haiti, so the students voted to send the proceeds there. Some students covered the cost of making the holes on their own or found sponsors, so the money from the $3 to $5 per person admissions could go to Haiti.