Our mall allowed us to put a Christmas tree up in Center Court. For each $5.00 donation, we would illuminate a light for your pet — a red one for “in honor of” and a white one “in memory of”. We asked for a picture of the pet and would hang it with a red or white ribbon. We had to put up an-other Christmas Tree because the first one because too full of pictures. We did not worry about the fact that we had 100 white lights on a tree, but 150 memorial pictures —- you can’t 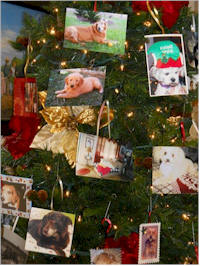 even the two out. We found that the public did not even pay attention to that. They were too busy looking at the pictures.

On the weekend, my mother took her Golden Retriever, Chelsea, to the mall. She was dressed as Santa, complete with bells on her toes and a Santa Hat. The kids AND adults loved it. Of course, we had the fish bowl out and would average $150.00 in donations a night. Also, we took thick foam board and put them on wreath stands. We had a red board for the honored pets and a white board for a memorialized pets. We listed their names on each board. We noticed that people liked to look at the names the try to find the picture on the tree. We were glad we wrote the names on the back. We earned over $3,000 from the tree and fish bowl. It was a so fun..

THIS IS IMPORTANT! We did not have someone at the tree at all times. The only time someone was at the tree was on Friday and Saturday night when we took Chelsea out there. Twice a week, I went out there to hang pictures and write names on the boards. The public never paid attention to me, but take a dog out there and they flock around and dump money in the fish bowl. We had a stand out front of the tree explaining what it was for. We kept forms in that stand for people to fill out. They would simply put their name, the name of the pet, was it in Memory or Honor of, etc. Then they would send it to the address at the bottom (my house). The BIG BIG money maker on this was something we almost did not do. We told people that if they wanted to buy a light in honor or memory of someone else’s pet, we would send that person a card. Many people made donations like that for Christmas Presents. When the person received a card, they turned around and made a donation either for their pet or someone else’s. This brought out a lot of emotion in some people. I saw several people who made a donation in memory of their pet just break down and cry when they saw the picture on the tree. We thought it would be necessary to have someone at the tree at all times, but we knew we could not do it. Turned out, we did not need anyone there except on weekend nights when the mall was really crowded. We also got the newspaper to print the form to fill out as a donation to us. We got a good response from that. Also, the local weatherman (a REAL popular guy) came out and did the weather from our trees twice. There was a huge response after that.  Source: ShelterFundraising