A Pearl River, New York fundraiser sets world ice cream sundae record at 406 feet, eight inches and raised funds for a school playground. Families packed the area and waited to hear two things. First they waited to find out if they met the goal of breaking the Guinness World Record. The announcement drew a cheer from the assembled crowd of hundreds, mostly parents and their children. Seconds later they got the announcement they were really waiting for. It was time to 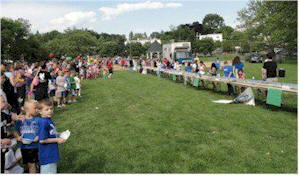 devour the record-setting sundae. A spokesperson said the initial plan was to make the sundae 150 feet long, but that was when the record was 125.

During the planning of the event, the record was broken by a 200-foot sundae, so the committee altered its goal to 250. The sundae was constructed in sections of aluminum gutters. The funds raised went to the committee’s efforts to upgrade the playground at Franklin Avenue Elementary School. “It’s nice to see the businesses in town do this,” a spokesperson said. “We charged them all $50 and it was like nothing.”