Durango, CO: Combine intriguing art with Durango’s premier classic music festival Music in the Mountains and what do you get? Violins and Vino, a great combination in any book.  Traditionally, the festival has kicked off with a fundraising soirée at Toh-Atin Gallery. In 2013, the event moved from the end of January to the end of March, which made for lighter spirits all around. Instead of a musical performance and an auction of private musical performances, this year’s festivities included an auction of violins painted and decorated by talented local artists along with just a few performances for sale – others were used at mini-concerts and fancy dinners as fundraisers for Music in the Mountains throughout the year, including From Russia with Love in February and April in Paris. Twelve artists received a gleaming new $75 violin, and most said the hardest part was marring that finish to get it ready to be a “canvas.” 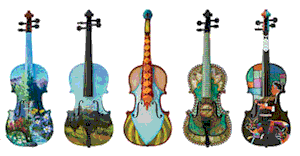